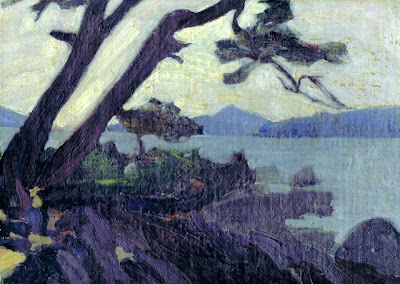 The winter tree against December's sky
Has never stood more poignantly than now;
There is no leaf to soothe its tragic lines.
But far beyond the landscape of the eye,
Within the core, within the barren bough,
Faith lies with life, inseparably entwined.

Poem by Dora Hagemeyer (1891-1989)
A Poet of Nature, the late Dora Hagemeyer was a fixture of the Carmel, California literary scene. For fifteen years, her column the "Poetry Corner" appeared in the local newspaper, The Pine Cone.

Spending this December on the California Central Coast, not far from the scene in this painting.