Easter Confections in Paper from Paris 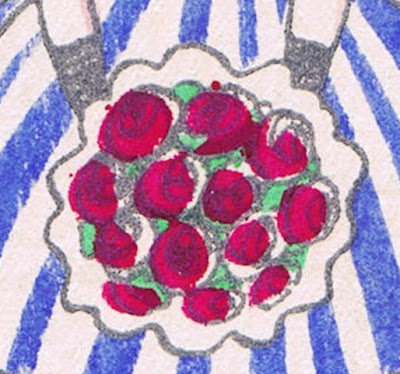 For you, a bouquet of antique Easter paper ephemera from Tolmer et cie, Paris. 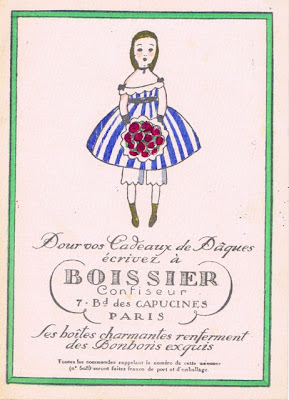 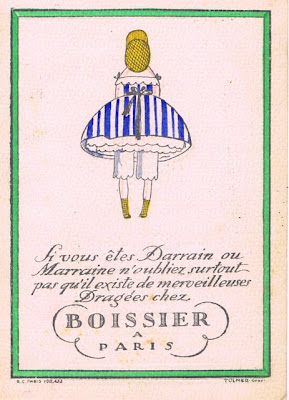 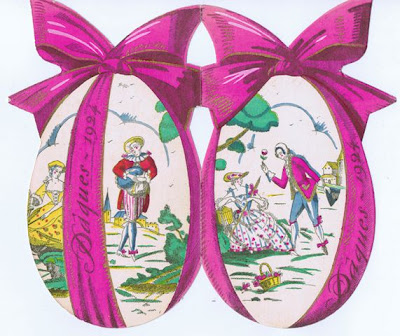 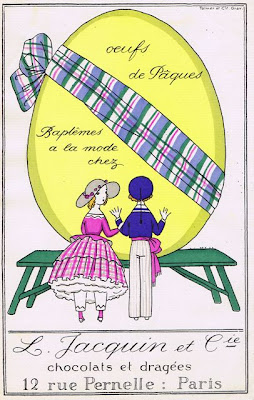 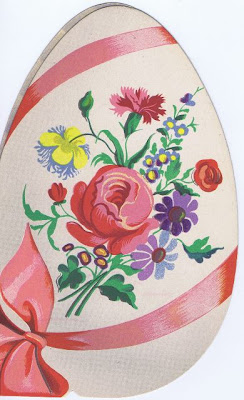 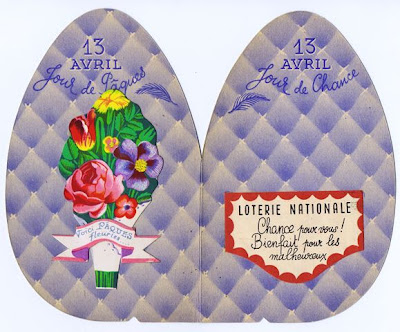 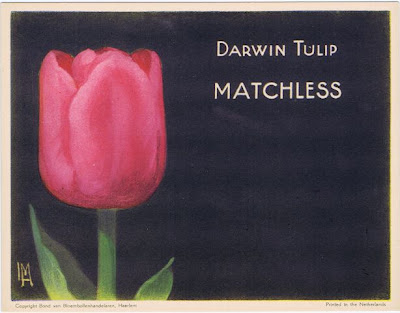 And tulips, children love to stretch

Their fingers down, to feel in each

Elizabeth Barrett Browning ~ "A Flower in a Letter"

Savor the Season,
Marjorie
Posted by Chemin des Muguets at 6:25 AM 8 comments:

I am a ribbon fancier. Take me to a shop such as Bell-occhio, Mokuba or V V Rouleaux, or set me in front a box of antique trims and ribbons at a flea market, and I am in vintage textile heaven. 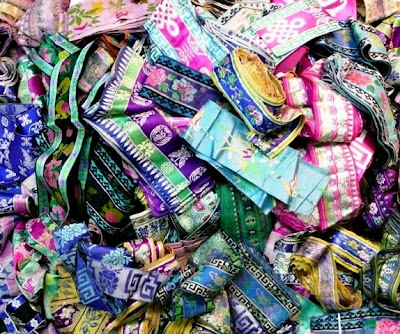 So when I spied a sack full of rolls of old embroidered ribbon at Beijing’s Dirt Market I was hooked. I soon became the stall vendor’s new best friend, as week after week I filled my big blue Ikea bags with these precious ancient threads. Then I found out that he made house calls. (In Beijing everyone makes home deliveries - the tailor, the nail lady, the Indian restaurant, the wine merchant). So every few weeks, the man from the market would appear at my door with a few plastic bags full of ribbon, which he would open and empty onto my dining room table. And then the bargaining would begin. 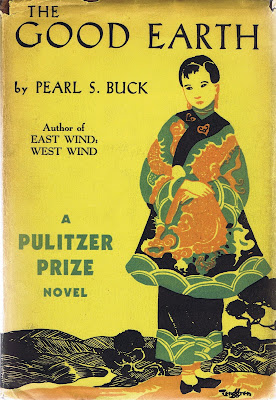 Most of the examples date from the late Qing era, at the time of the last Emperor, circa 1900. Their original purpose was to imitate hand-embroidery, and to trim garment robes, jackets and hats, or interior decorations. My ribbons are mostly machine woven. They range in width from ¼” to several inches wide, and in length from tiny swatches to many meters of a particular pattern. Rich in color, the surfaces are covered with graphic repeat patterns of Chinese characters, motifs, and symbols such as flowers, butterflies, and birds. Lately, the clever seamstresses of Beijing have been busy cutting antique ribbons up to make replicas of the the small slippers so popular with foreign tourists. So in a sense I was rescuing these textiles from such a fate.

Alas, my accessioning halted with our departure from China.
But, what to do with such beauty? 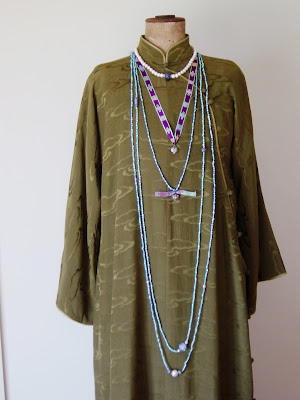 Taking lengths of the ribbon, I matched these to corresponding Chinese silver rattles (once used to adorn Children’s hats), and created necklaces. 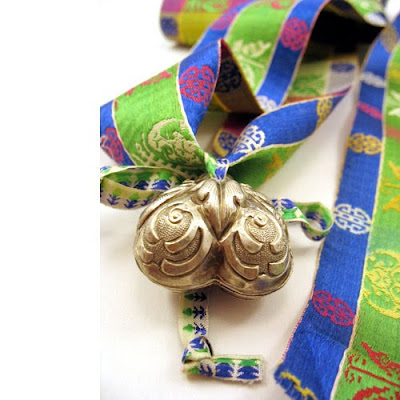 But I still feel these exquisite ribbons deserve just the right couture treatment.

Perhaps, elegant evening bags, or, as one friend suggested, Chinese ribbon patchwork quilts or throw pillows. I am open to suggestions. Any ideas out there?

A Dog to Love 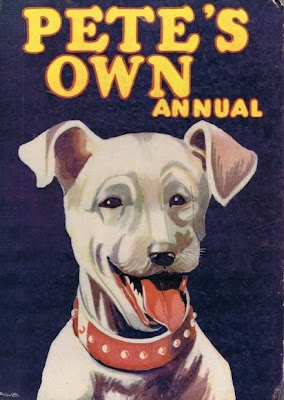 I still remember that Christmas: getting up at dawn, rushing down the stairs, carefully plugging in the tree lights, and listening for any sounds of life. I was about five years old, and I had been lobbying my parents for months to get me a puppy. I swore to them that my allergies would not be a problem, nor would I allow the dog to annoy the grumpy old man next door. I WANTED A DOG! I was certain that my pleading, pouting and tears would win over my parents, and that Santa would grant me my wish.

That morning, I searched high and low, and then I saw it. I could not believe my eyes – it was a STUFFED DOG! There had to be some mistake. What planet was Santa living on? Hadn’t I made myself very clear? It was a real dog that I wanted. One that I could love, that would lick my face, jump into my lap, and follow me to school - not some dopey stuffed animal, which would sit impassively on my bed! My heart still aches at the memory. 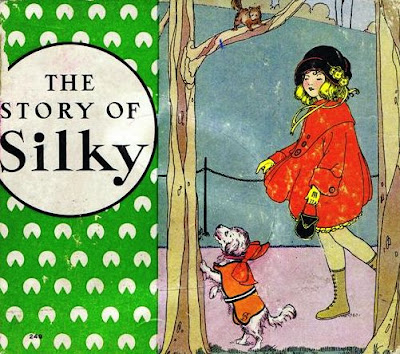 My family did eventually get dogs. First came Silky, and then Max; but by then I was grown up and out of the house.

My puppy longing has never subsided. Over the years, with all my travels, it never seemed fair to take on the responsibility of owning a puppy. But, I have enjoyed the dogs of others - walking, petting, and baby-sitting them whenever given the chance. I have revelled in the many awards that my friend Kate’s Scotties have won. And, I have wept tears with my friends Linley, Cathy and Michelle as they lost their beloved pets. Only this past week, a new friend and blogger Kary lost her sweet Buddy. 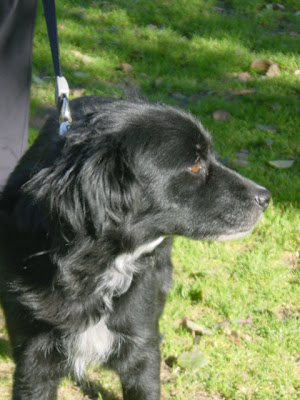 But, I have a new dog in my life, my grand-pup Winnie. Isn’t she beautiful? We’ve yet to meet. But I love her already.

They call it Puppy Love,
Marjorie
Posted by Chemin des Muguets at 7:53 AM 12 comments:

Victorian Rambles in Search of Fossils 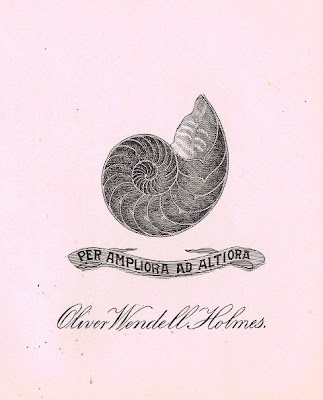 The 19th century was the heyday for amateur and scientific exploration of the Natural World. Enthusiastic hunters and gatherers set out in search of new species and rare specimens of ferns, sea moss, feathers, birds’ eggs, and fossils.

Among these was the Victorian naturalist Mary Anning (1799-1847 or 1850) of Lyme Regis, in Dorset, England. You might not have heard of her. But this is not surprising, for even in her own time, Mary’s fossil discoveries were attributed to others. But, according to the Natural History Museum (UK), she was “the greatest fossil hunter ever known.” In fact, the Museum’s list of eminent Natural History biographies includes only two women, and Mary is one of them. On this list, she keeps company with the likes of Charles Darwin, Joseph Banks, Gilbert White, and Carl Linnaeus.

A life-long resident of Lyme Regis, Mary was the product of a working class home, and was introduced to fossilling by her father. This does not mean her life was without adventure. She survived being struck by lightening at age 15 months, and later in life, being buried in a landslide.

It was while exploring the Blue Lias geological cliff formations between Lyme and Charmouth, that she made her exciting finds - Ichthyosaurus, Pterodactylus, Plesiosaurus, as well as Ammonites (for which the area is known) and fossil fish. 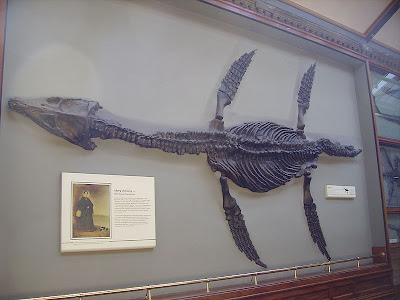 At first, she set up a stall at the seafront, and sold her ‘curies’ (fossils) to tourists. Later, she opened a proper shop front, and also sold to wealthy collectors, scientific societies and museums. Many of the prominent scientists of the day visited her in Lyme Regis, including Henry De La Beche, William Buckland and the Rev. Conybeare. 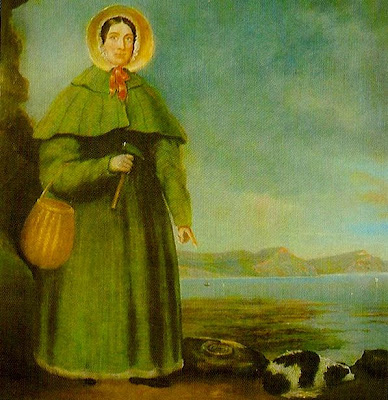 This is the most famous portrait of Mary. She is holding a tool for digging, and her bag for collecting - on the ground at her feet is an ammonite fossil, and her little dog Tray, who accompanied her on excursions. (Alas, dear Tray died in a landslide. Mary died of breast cancer in 1847 or 1850.) 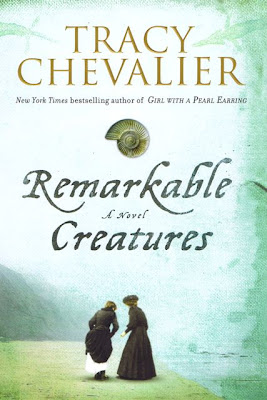 The story of Mary’s life, as well as that of her enduring friendship with another local resident and fellow fossil hunter, Miss Elizabeth Philpot, is recounted in Tracy Chevalier’s delightful new book “Remarkable Creatures”.

If you visit Lyme Regis, you will find reminders of both Mary Anning and Elizabeth Philpot everywhere: The Cob (the impressive sea wall at the town's harbor); The Three Cups Inn (Unfortunately now closed, but where we stayed many years ago); the beach and cliffs where you can even make a guided fossil expedition; 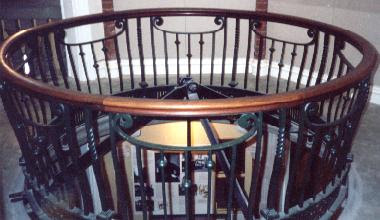 and The Philpot Museum. The interior of the Museum resembles a nautilus shell, and contains many mementos of Mary (including her digging tool), and numerous geological treasures.

You may also recognize Lyme Regis as a setting in Jane Austen’s “Persuasion”, and John Fowles’ “The French Lieutenant’s Woman”. In fact, novelist Fowles (1926-2005), a longtime resident, was at one time the curator of The Philpot Museum. After our visit to Lyme some years ago, I joined the Friends of the Museum, and each year received reports of the Museum’s activities, which included a Curator's report written by Fowles himself.

Lastly, it is interesting to note, that the tongue-twister “She sells seashells on the seashore” is said to have been inspired by the same Mary Anning. 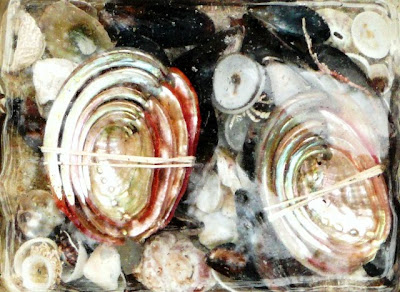 Here in the California resort community of Carmel we have “Abalone Joe”. With his long white hair, bushy beard, and ruddy complexion, Joe can be found most weekends peddling his ocean souvenirs (single and nested Abalone shells of all sizes) to the tourists who promenade up and down swanky Ocean Avenue. ”Joe” acquires his shells from an abalone farm up North, then cleans and polishes them with mineral oil. According to local legend he travels up and down the Pacific Coast from Oregon to Southern California selling his wares. A modern-day Mary Anning; “He sells seashells by the seashore!”

P.S. The bookplate at the beginning of this post belonged to Oliver Wendell Holmes, Sr. (1809-1894). He was a noted American physician, professor, author, poet and the father of Oliver Wendell Holmes, Jr., a US Supreme Court Justice. His poem, "The Chambered Nautilus" and his bookplate reflect a deep interest in natural history.
Posted by Chemin des Muguets at 11:13 AM 11 comments: