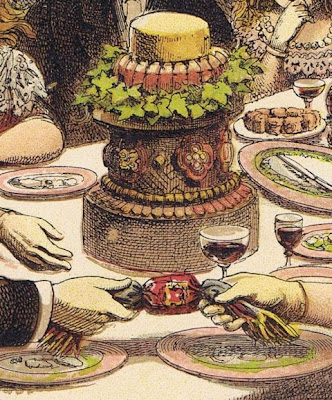 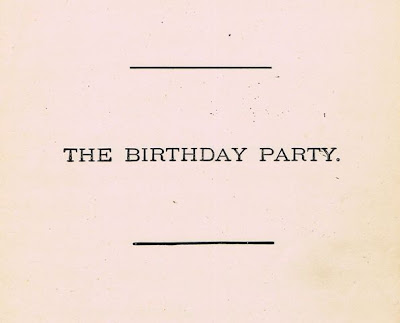 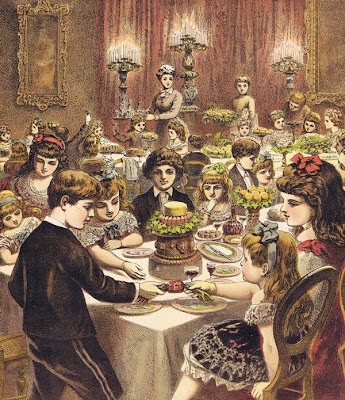 Now the supper is ready, the
tables are spread
With rich cakes, creams, and jellies,
and wines, white and red,
With ripe fruit and blanc-manges,
with custards and ice;
With sweetmeats and crackers,
and everything nice.
With happy smiles and bright glances
the guests gather round,
And fun, frolic, and mirth at each
table abound.
They drink health to Carrie and Julie;
next crackers they pull;
Plates very soon emptied were soon again full;
Strange mixtures were eaten, both
in earnest and fun;
Cracker mottoes amused them
when supper was done. 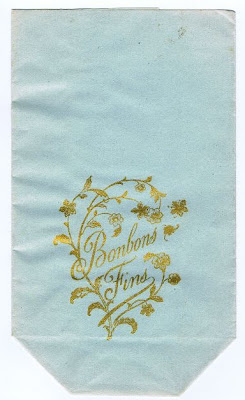 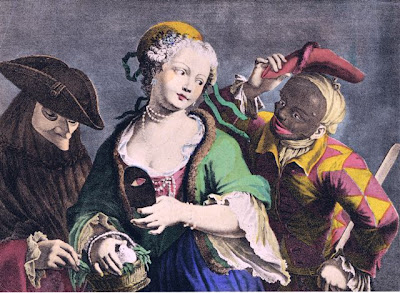 Of all the places where Carnival
Was most facetious in the days of yore,
For dance, and song, and serenade, and ball,
And masque, and mime, and mystery, and more
Than I have time to tell now, or at all,
Venice the bell from every city bore,~
And at the moment when I fix my story,
That sea-born city was in all her glory. 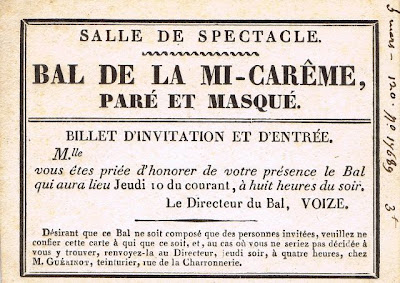 With fiddling, feasting, dancing, drinking, masking,
And other things which may be had for asking. ("Beppo") 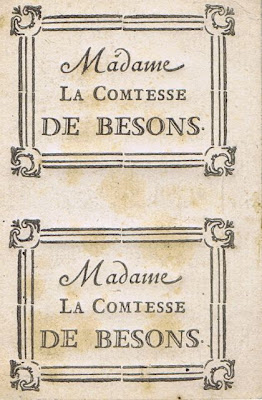 An antique calling card, on the verso of an early playing card 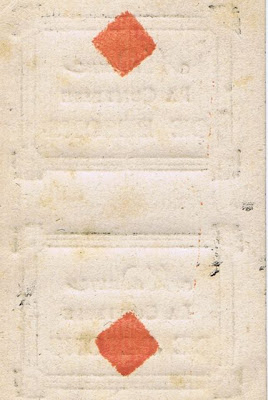 And gaiety on restless tiptoe hovers,
Giggling with all the gallants who beset her;
And there are songs and quavers, roaring, humming,
Guitars, and every other sort of strumming. ("Beppo")

The Carnival in Venice was a popular stop on the nineteenth century Grand Tour. Tourists and the crown heads of Europe alike, cavorted at parades, masque balls and street parties in Piazza San Marco, the Piazzetta, and in the courtyard of the Ducal Place. 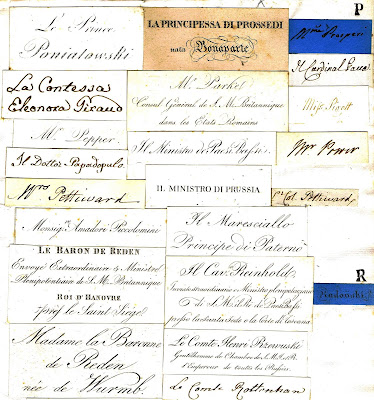 Such events were perfect opportunities for the nobility to exchange and collect each other's cartes de visites. Here is a page from an early collector's album. (Click on image to enlarge)

P.S. The color headpiece at the top of this post showing Carnival revelers, is an antique print by Tolmer et cie, Paris. For three generations Maison Tolmer was known for their exquisite designs and printing for French couturiers and parfumeries.
Posted by Chemin des Muguets at 1:53 PM 11 comments:

Being George and Martha - President's Day 1909 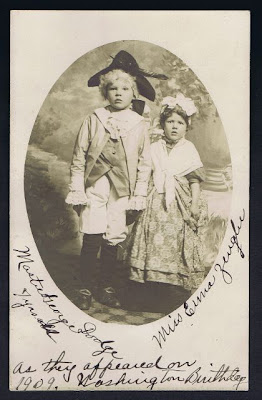 Valentines in the Classroom ~ February 1915 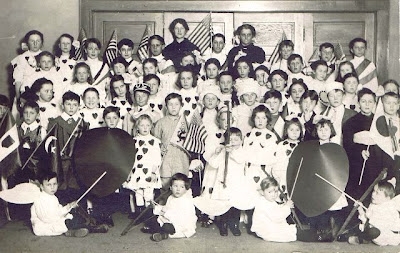 It was February 1915, and all week long, the students at North Street School prepared for Valentine's Day. Little hands were kept busy cutting out hearts from red and pink construction paper. As they worked, their teacher, Miss McCherry, recited the following poem by Mary Catherine Parsons for inspiration:

Forget-me-nots are round the edge,
And tiny roses, too;
And such a lovely piece of lace-
The very palest blue.

And in the center there’s a heart,
As red as red can be!
And on it’s written all in gold,
“To You, with Love from Me.”

Then, when they were finished, like good little children everywhere, they put away the unused sheets of colored paper, pots of paste and scissors. It was time to rehearse their Valentine's Day play. The celebration is memorialized in the above photograph. The class poses, wearing hearts and holding American flags. A few tiny cupids with paper wings aim bows and arrows at heart-shaped targets. In the center, reigning over it all, are the youthful King and Queen of Hearts, in crepe paper crowns. The teacher stands proudly in the the center back row.

I too, have been busy. I've been digging through my collection of antique Valentines, and searching for a special one to send to you. As much as I am attracted to antique paper lace Valentines, I chose instead this sweet handmade card. It was lovingly crafted long ago, by some unknown child. I think it is perfect! 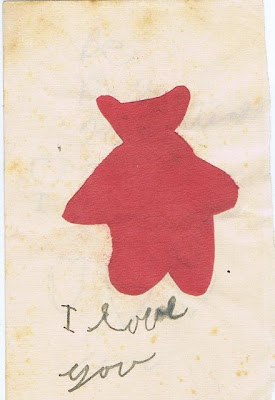 Wearing my heart on my sleeve,
Marjorie

P.S. You might be interested to know that most of the antique paper used in my blog postings comes from The Parrott Collection, my archive of antiquarian books, prints and ephemera.
Posted by Chemin des Muguets at 9:09 AM 14 comments: 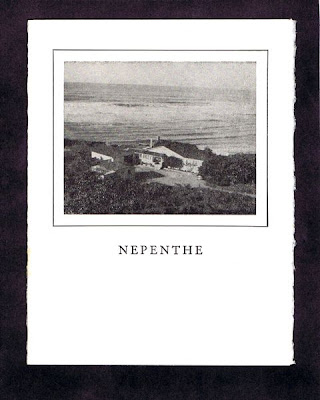 There is an air of mystery about ‘Nepenthe’, the Big Sur landmark and restaurant, which sits high on the cliffs above the Pacific Ocean. 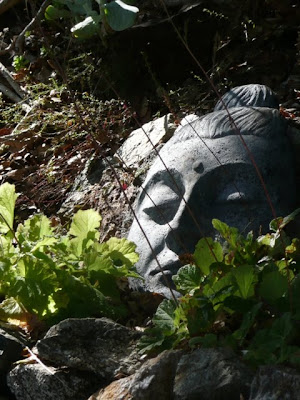 Perhaps it is the spirit of Henry Miller, who in pre-Nepenthe days, lived in a cabin on the property. Or the ghosts of Orson Welles and his new bride Rita Hayworth, who were the next owners. They came upon the spot while driving down the coast, fell in love with it, and bought the cabin. (Although they never lived in it.) Or perhaps it is the enduring creative energy of the Fassett family, who for 60 years has owned and operated Nepenthe. It might even be the memory of the passionate love of Elizabeth Taylor and Richard Burton who filmed scenes of their movie The Sandpiper on the restaurant’s terrace. 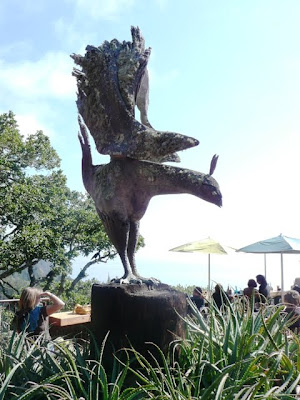 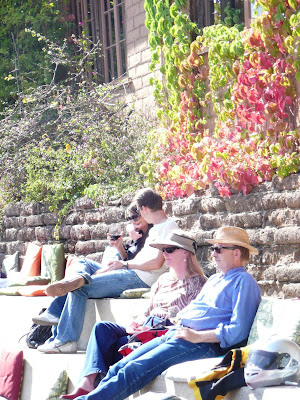 Whatever it is, ~ it is magic. There is something in the air. Sit at one of the outdoor benches on the terrace, looking out to the Big Sur coast, and you’ll be mesmerized. 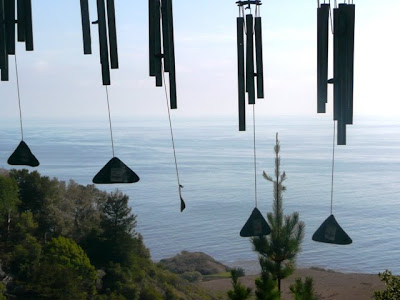 Lost in the view, and sense of place; you will never want to leave.

For Bill and Lolly Fassett and their offspring, Nepenthe was home. It was also a place to celebrate their love of art, food and design. Some of the family are still involved in the day-to-day running of the restaurant and The Phoenix Gift Shop. Others live near-by, and some are further afield. But all carry a creative spark that was first ignited at Nepenthe. 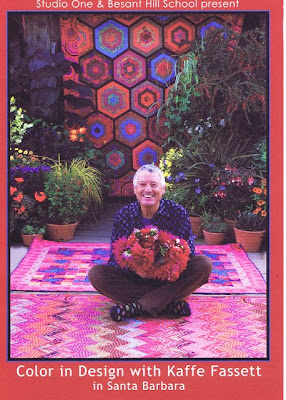 One Nepenthe export is Kaffe Fassett, the internationally known textile designer. Though based in London, he travels the world for inspiration, and to give lectures and workshops. On a recent chilly evening, we joined 400 of his fans at the Pacific Grove elementary school, where we were dazzled by his illustrated talk on color and patterns. 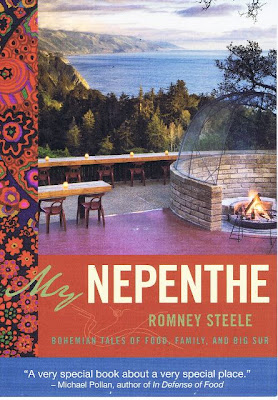 The next generation includes, grand-daughter Romney Steele who is a chef, and writer. She has just penned a memoir titled “My Nepenthe". Her book sings with personal memories, and those of her family and friends. The pages are decorated with vintage black and white photographs from the restaurant's archives, and with color photographs by Sara Remington. All this is accompanied by eighty-five family recipes. Some of which, I had the pleasure to sample at her recent book signing at the Carmel Bay Company. (This is one of my favorite shops here in Carmel.) 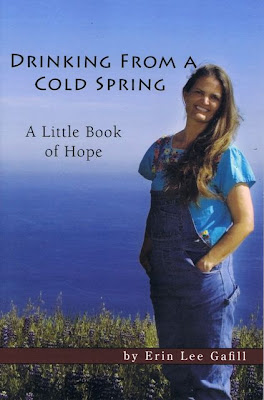 Yet another member of this generation is the artist and writer, Erin Gafill. She tells her Nepenthe story in the book, "Drinking from a Cold Spring". 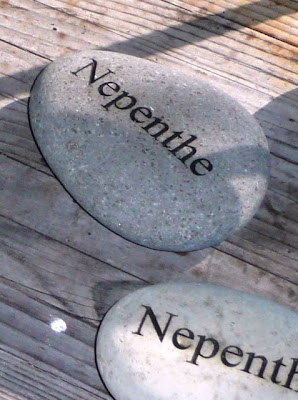 I have my own Nepenthe story. It all began with a scrap album that I found in an antique shop in Upstate New York. The album belonged to the wife of a American colonel in the US Army, who had been stationed in Paris in the 1940s. Pasted onto the pages were invitations to tea, engraved calling cards, and various other paper mementos. As I flipped through the album, I was intrigued by a vintage Christmas card with a striking black and white photograph, showing a distant view of a building overlooking the ocean. (See image at the beginning of this post.) Printed below the image was the word “Nepenthe”. Inside the card was the following poem:

The sea lions are our neighbors,
The Pacific at our door;
Ships tell us of their travels
And ebbing tides of ocean lore;
Here you are always welcome,
Won’t you tap upon our door?

I wondered, could this be the Nepenthe?
Big Sur Dreaming,
Marjorie