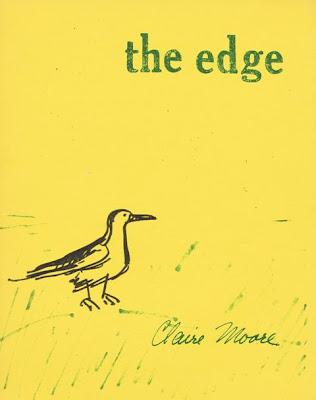 In 1969, there was an oil spill in the Pacific Ocean, near Santa Barbara California. 80,000 to 100,000 barrels of crude oil spilled into the water and onto the beaches of Santa Barbara County. 10,000 birds were killed. Soon afterwards, artist Claire Moore published a book, "The Edge", in which she vividly described in words and drawings the impact of an ecological disaster.

The Edge
Prose and Drawings by Claire Moore 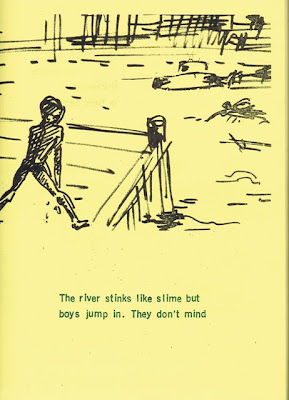 The river stinks like slime but
boys jump in. They don’t mind

Fill levels and buries
the marsh and phragmites.
The mud hens, banished,
clutch their shadows. 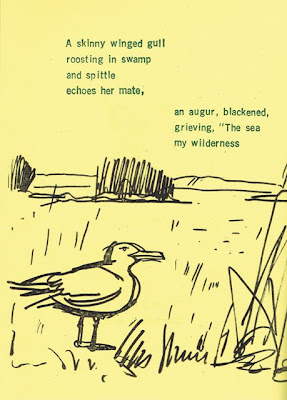 A skinny winged gull
roosting in swamp
and spittle
echoes her mate,

an augur, blackened,
grieving, “The sea
my wilderness 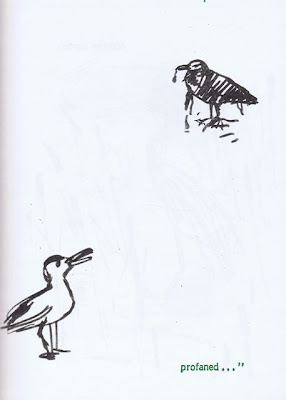 And the heron.
Is that a heron’s
shadow, one, two,
one, stepping?

Afloat – a girdle of terns.
Terns trilling on the shore’s edge.
The terns rise up all together,
like a quivering cloud.

Whereupon the man
whose small brave body,
to an observer
like an exhilarated bird,
dives in – into the wave.

Oh buoyant bird
listening
to the desert
we call “Sea,” 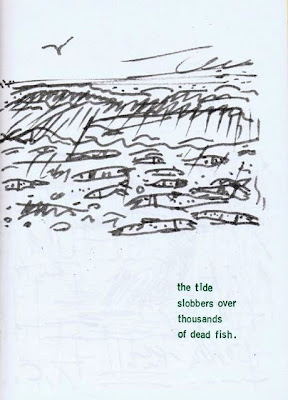 the tide
slobbers over
thousands
of dead fish. 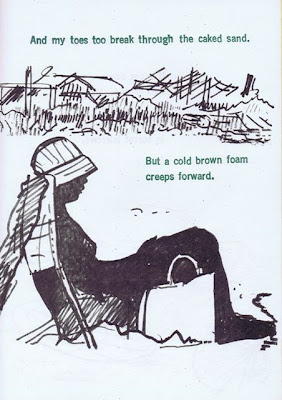 And my toes too break through
the caked sand.
But a cold brown foam
creeps forward.

It seeps down
into castanet-like clams
wasting their words
in secret burrows.

It seeps down into tubelike shells
into beings
stronger than waves
but stained. 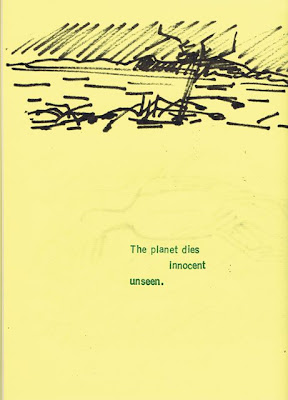 Another case of history repeating itself!
Marjorie

P.S. Those of you who read my blog may recall that my grandfather was a charter fishing boat captain in the Gulf Of Mexico. As a child, I spent many hours exploring this special part of the world, and was in constant awe of the diversity of its natural history.

Note: The American artist, Claire Moore was born in New York City in 1917. Since the 1930s, she was writing prose and making prints. She studied at the Art Students League, and worked with David Siqueiros at the Siqueiros Workshop. Sponsored by Fernand Leger, she received a MacDowell Fellowship. Her books and prints can be found in many collections throughout the United States. She died in 1988.
Posted by Chemin des Muguets at 3:47 PM