The Mystery of the Travelling Violin Case 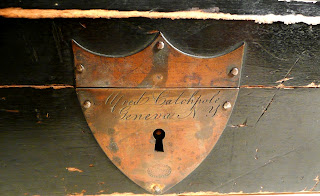 It was just another day of antiquing here on the Central Coast of California, when I discovered this 19th century violin case.  It is not exactly the type of item I normally look for, or at. In fact, it was a bit creepy.  It was made of wood, painted black, and because of its form, I would later learn is often called a "coffin-shaped" violin case.  Yet something drew me to take a look.  There on the front was a cartouche with copperplate engraved lettering and the owner's name - "Alfred Catchpole Geneva, N.Y.".  Those of you who follow this blog, will know that I am from the East Coast of the United States, and that my hometown is Geneva, NY.  So here on the West Coast was a memento of my childhood home! 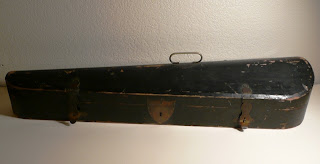 Some preliminary research has uncovered information on the Geneva Catchpoles:  Alfred Catchpole died on August 13, 1913 at age 84.  His wife, Emily, died on May 30, 1905 aged 73 years old. Their only child, Alfred Edward, sadly died on September 14, 1873 aged 14 months.  They are all interred in Glenwood Cemetery in Geneva, NY.  Alfred senior, owner of the violin, was a respected member of the community, and one of the founders of the Catchpole Boiler Works. 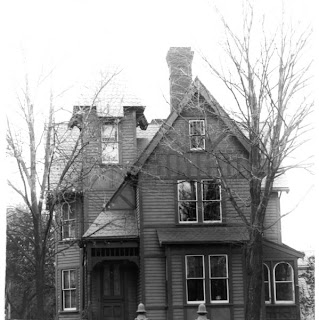 The family home was at No. 9 Genesee Park.  I know this house well.  It is located on the park across from the Presbyterian church where generations of my family worshipped.  I remember this house being home to Ida Smith.  An elderly spinster, every Sunday she sat in a pew at the front of the church, with another elderly lady, both dressed in black, and looking like characters out of a Gorey cartoon.  When Ida passed away, a young family bought the house for a very modest price.  Rumor has it that the rooms were filled floor-to-ceiling with amazing antiques and artifacts, some ending up at the local historical society, some being sold, and some kept by the new owners.  I wonder if the violin was part of this dispersal?

The violin case itself travelled even before it arrived in Upstate New York.  Examining further the metal plate on the front, I found a tiny maker's mark with the name "Delanoy".  Alexandre Delanoy (1850 -1928) was a famous violin maker who worked in Bordeaux, France.  Some of his violins now fetch up to $35,000.  Mrs. Catchpole was born in France, and perhaps she brought the violin and case to the marriage.  Where is that violin now? I do know where the case is! 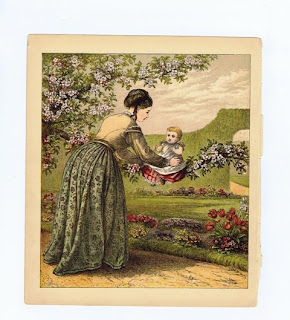 These endearing images from the pages of a nineteenth century children's book remind us that ... 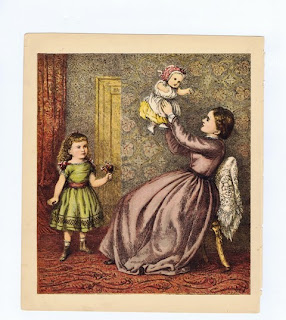 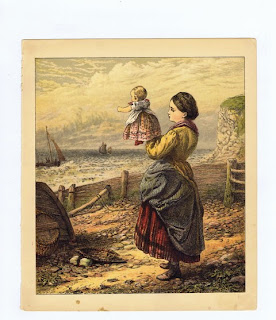 Timeless!
With gratitude and love, Marjorie